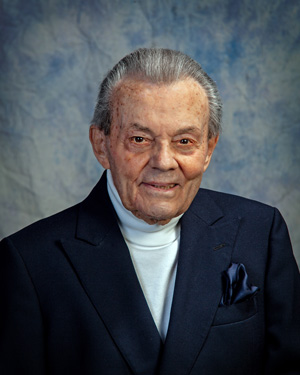 Alumnus of the Year

ALUMNUS OF THE YEAR: 2022
Frederick A. Bichet II

Frederick A. Bichet II was born in 1934 in New Orleans at Hôtel-Dieu (which is French for a Catholic hospital). His father worked for the U.S. Army Corps of Engineers, therefore they moved often. Fred spent part of his childhood in Jamaica, attending a British elementary school. Then moving to Jacksonville, Florida and back to New Orleans before coming to Florence, Kansas in 1947 where his grandparents lived. The Claude Francis Bichet farmstead is still located outside Florence and was established in 1858 by Fred’s great grandfather, who moved to the United States from France after his service in the French Navy. The farmstead is registered as part of the Kansas State Historical Society and was also home to a limestone schoolhouse, known as the Bichet School. It is still farmed and occupied by his granddaughter and her family.

Fred attended Florence High School where he was involved in many activities such as basketball, baseball, track and music. In 1953, he received a draft notice and served in the United States Army until 1955. He was stationed at Fort Carson, Colorado as the company clerk for the intelligence unit and was extremely proud to serve his country. After serving his time in the military, Bichet returned to Kansas and decided to continue his education. In the fall of 1956, Fred moved to Hutchinson to attend Hutchinson Junior College, but was unsure what major to choose. With the advice from one of his favorite instructors, Mrs. Margaret Randles, she convinced him he would make the perfect teacher. Her guidance and structure helped him find a path to his future in education. While at HJC he was a member of the Student National Education Association. He and three of his friends rented the basement of a house on Plum Street to stay close to campus and its activities.

Following graduation in 1958. Fred transferred to Emporia State University where he not only received his Bachelors in Education, but a Master’s in Psychology and Business Administration. He then returned to Hutchinson as an educator for the USD 308 school district. In 1962, he married fellow educator, Carol (Smith) Bichet. Throughout his career he worked at Faris Elementary for two years and was transferred to Morgan Elementary where he later became principal and worked a total of 35 years for the district. “I thoroughly enjoyed my career with Hutchinson Public Schools. It was very rewarding to be a part of so many children’s lives over the years.” said Bichet.

Fred and Carol had two children; Stewart Bichet and Shauna Bichet. They have three grandchildren and one great-grandchild. After retirement, the Bichet’s enjoyed traveling. Many of their vacations were voyages on cruise ships to wonderful and interesting places. They were married for 57 years. Carol, who passed in April of 2020 was a Hutchinson High School graduate. She then attended the University of Central Arkansas where her dream was to become a physician. Because of the lack of financial assistance for women in medical school at that time, she could not afford the educational costs, so her dream had to change. She transferred to Emporia State University, receiving her Master’s in Education and returned home to Hutchinson to teach. She was a grade school teacher for Buhler USD 313 for 35 years.

Past Alumnus of the Year